Pests are responsible for damaging 35 million hectares of forest around the world every year. In the Mediterranean region alone an area the size of Slovakia – five million hectares – is affected by pests annually, according to the UN Food and Agriculture Organization (FAO).

Only a tiny proportion of exotic pests that arrive in Europe end up damaging trees. ‘But these are very harmful, and there are more and more (of them),’ said Dr Hervé Jactel, director of research for forest entomology and biodiversity at the French National Research Institute for Agriculture, Food and Environment. 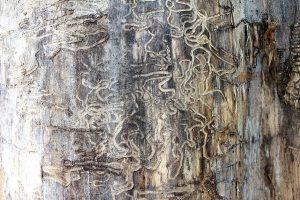 On average, six new species of tree pests are being introduced to Europe every year, up from two a year in the 1950s, says Dr Jactel. They arrive in potted plants and wooden products or packaging.

Many of the emerging threats to Europe’s forests originate in Asia. The emerald ash borer, for example, spread from Asia to the United States where it killed more than 150 million trees and may have cost more than 10 billion dollars in the last decade. It is now knocking at Europe’s door.

‘We know it will kill all ash trees, or most of them,’ said Dr Jactel, who is the coordinator of the HOMED project which is developing new ways to detect such exotic pests early. The polyphagous shot-hole borer is another major threat. It can attack virtually all deciduous tree species in Europe, says Dr Jactel. ‘It’s a very, very dangerous tiny beetle,’ he said. ‘This is probably the next big issue for Europe.’

This little insect originated in Asia, spread to Israel, California, and then South Africa where it has killed hundreds of thousands of trees. In April this year it was discovered for the first time in Italy, in a tropical garden. There is no sign yet that it has spread anywhere else in Europe.

Despite all of the countries affected by the beetle being on the alert for it, none were able to detect it until it had already caused damage, says Dr Jactel. The problem is spotting exotic pests and pathogens before they start attacking trees.

Hundreds of thousands of containers filled with goods arrive in Europe’s harbours and airports every day. Tiny insects or spores from fungal diseases can stow away in shipments containing wooden products, pallets or packaging, or live plants. The sheer number of shipments is overwhelming the resources of sanitary inspectors to detect insects and spores, says Dr Jactel. ‘It’s like finding a needle in a haystack.’ 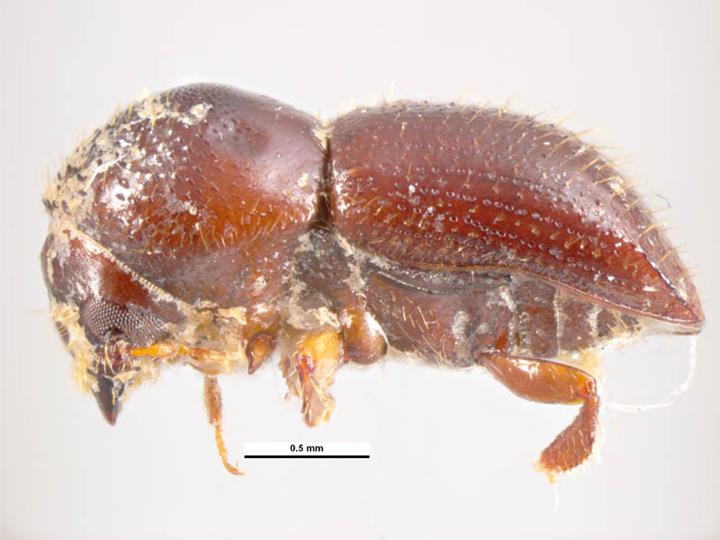 Once the containers are opened, pests can then easily escape to nearby trees. So increasing surveillance of trees growing around ports and airports is a good starting point, says Dr Jactel.

Finding solutions to these pests is vital. Forests cover 43% of the EU’s land area – 182 million hectares in total – and growing. The forestry sector accounts for approximately 1% of EU GDP, and provides jobs for some 2.6 million people. If allowed to run rampant – without the natural predators found in their native habitats and among trees that have not evolved defences against them – the pests could be devastating.

But new tools are also needed to alert inspectors to the presence of pests in containers before they can escape, he adds.

The HOMED team are developing generic traps to attract a wide variety of insects. These will be placed in shipping containers before they set off from their country of origin, and in airports, harbours and train stations where the imports arrive. 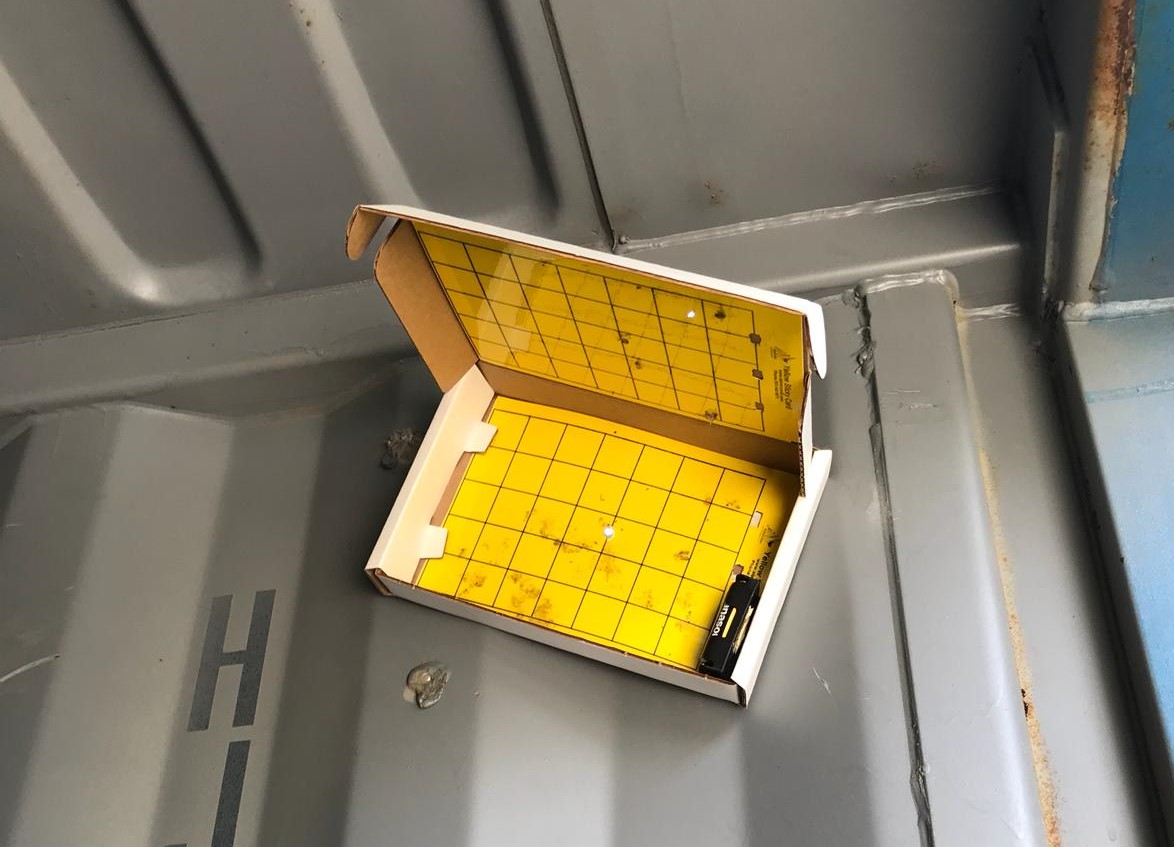 The teams are also developing traps for fungal spores, and DNA tools and databases of species to help identify whether a spore is local or imported. The project is also planting  sentinel European trees in Asia, North America and elsewhere that can help scientists identify early which pests might pose a particular threat to European trees.

For pests that have already taken hold in Europe, one possible solution is to import that pest’s natural enemies from its country of origin, says Dr Jactel.

Scientists in France and Switzerland are investigating whether the natural enemies of the destructive box tree moth – which has spread from China across Europe –  can be imported and used to contain it. But releasing this parasitic wasp to target the moths might bring other problems.

Many threats to Europe’s forests, however, are closer to home. A warming climate in many regions is helping some native pests to become more common. The bark beetle is one of the most damaging pests currently attacking Europe’s forests, destroying spruce trees in Central Europe.

The Czech Republic has had to cull so many infected trees in recent years the price of wood has plummeted as the resulting timber has been sold off, says Dr Julia Yagüe, project manager of My Sustainable Forest (MSF), which monitors the health of Europe’s forests. Spruce trees take up to 140 years to fully grow, so the loss of so many trees will be felt for a long time.

This is largely because warming temperatures have allowed the beetles to breed more frequently. ‘Some 20 years ago, we’d have one breeding cycle per summer, but nowadays we have up to four breeding cycles of bark beetle in the Czech Republic and southern Germany,’ said Dr Yagüe.

Warmer, longer and drier summers also mean trees are more vulnerable to attack because the conditions leave them less able to cope with pests, she says.

Some 20 years ago, we’d have one breeding cycle per summer, but nowadays we have up to four breeding cycles of bark beetle in the Czech Republic and southern Germany.

Scientists are creating variations of native spruce trees, which they hope will be more resistant to higher temperatures and drought, and so better able to fight off attacks from pests.

But in the meantime, forests urgently need closer monitoring, says Dr Yagüe. Forest managers usually take an inventory once every five to ten years. ‘Because climate change is pressuring so hard, we need to update our data on forests much more often,’ she said.

The most efficient way to monitor large forests is with satellite observations, which can help detect the early warning signs of trees that are under water or heat stress, and so are more susceptible to attack. They can also allow forest managers to spot the first signs of an infestation, such as dryness, loss of foliage, or dieback.

‘With remote sensing from satellites we can spot this sickness before even the human eye can detect it,’ said Dr Yagüe, who is a remote sensing expert at the Spanish aerospace company GMV.

MSF’s job of gathering data became easier with the launch of Europe’s Copernicus satellites in 2014, and the development of technology able to process huge amounts of information. MSF now receives snapshots of Europe’s forests every five days instead of every 15 to 30 days before Copernicus. ‘We get this information for free,’ said Dr Yagüe.

But there is another crucial element to improving the health of Europe’s forests which is much closer to home.  Many of Europe’s forests have been abandoned. While they were once carefully managed landscapes, as people moved to cities, ‘the knowledge of living together with nature has been lost’, said Dr Yagüe. ‘Recovering this is super important.’